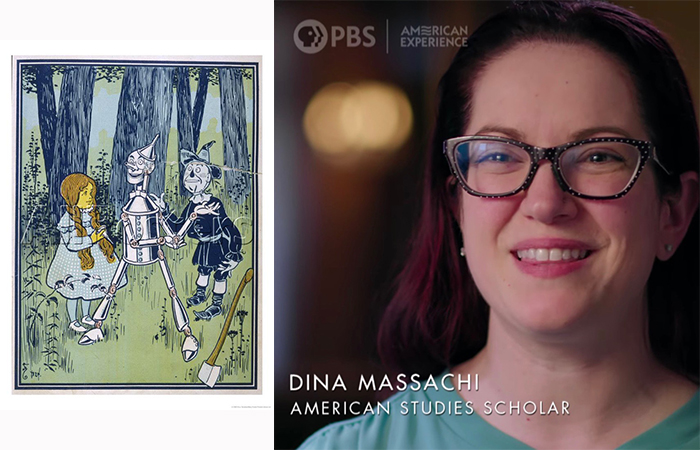 UNC Charlotte faculty member and alumna Dina Massachi ’15 M.A. has followed a long and winding road to build her extensive knowledge and understanding of L. Frank Baum, author of the enduring classic, The Wonderful Wizard of Oz.

Her scholarship – combined with her love of all things Oz – undoubtedly led to her selection as one of the experts to provide insights on Baum in a PBS documentary, American Oz, which premieres on April 19.

Baum continually reinvented himself, while witnessing the economic uncertainties of his time. His observations of life and his sense of wonder and optimism shaped his writing and other creative works.

“I’ve been obsessed with the Wizard of Oz since I was a kid, and I’ve had the good fortune of turning this obsession into a career as I teach The Wizard of Oz,” says Massachi, a lecturer in the Department of English and the American Studies Program in the College of Liberal Arts & Sciences.

She has created and taught courses on adolescent literature, American utopian literature and Baum’s Oz novels. She earned a master’s degree in English with a concentration in children’s literature from UNC Charlotte.

In one significant project, Massachi created an online reading of the book, to relieve people’s COVID-19 isolation and bring them closer together in a virtual way. A different person with a connection to Oz reads each chapter in the series. Readers include Baum’s great-granddaughter Gita Morena, scholar Sally Roesch Wagner, author Gregory Maguire, and celebrity Shanice Williams. The series can be found on the Oz Museum website.

Learn more about Massachi and her work from her answers to questions below, and in English Professor Mark West’s Storied Charlotte blog post.

Q. How did you become involved in the documentary?

A. I contributed a chapter titled “L. Frank Baum: Brains, Heart, Courage” to UNC Charlotte English Professor Mark West’s 2018 book Shapers of American Childhood. The documentary producers mentioned that this is what caught their eye, though I’ve heard from some of my Oz friends that they mentioned my name when they spoke with the producers. The Film Posse – who produced the film – and I talked several times on the phone before they flew me to Boston to film.

Q. What is your reaction to being included, particularly as a scholar of Baum and The Wizard of Oz?

A. Well this is an interesting question! I’m very torn between being incredibly honored and a little scared about the final product. I haven’t seen anything that isn’t public, such as the promotional pieces about the film, so I’m not sure what the documentary looks like. The whole experience was sort of like turning in a group project where you only know your own piece. If this process taught me anything, it’s that I prefer the control that writing and editing provide more than I prefer this type of media – no matter how glamorous it seems. However, you can’t beat the sort of audience that television provides. Hopefully, The Film Posse chose to honor Baum the way they suggested they would during our various conversations.

Q. What motivates you to study this subject, and what do you hope students who take your classes learn?

A. I’ve loved Oz since I was very young, so it’s especially fun to still live in my favorite childhood fantasy world. As an adult, I understand how Oz functions as something of a utopia for unusual characters – especially misfits who defy gender expectations. This seems particularly revolutionary when you consider that the first Oz book was published in 1900. There’s also a lot of feminism tucking into the text. L Frank Baum’s mother-in-law, while often left out of history, wrote, spoke, and hung out with Susan B. Anthony and Elizabeth Cady Stanton, and observant readers can see her fingerprints all over the story.

Q. What can we all learn from The Wizard of Oz, broadly speaking?

A. Oz has tons to teach us about acceptance, self-reliance, and about enjoying the journey, and finding your power. There’s something for every reader.