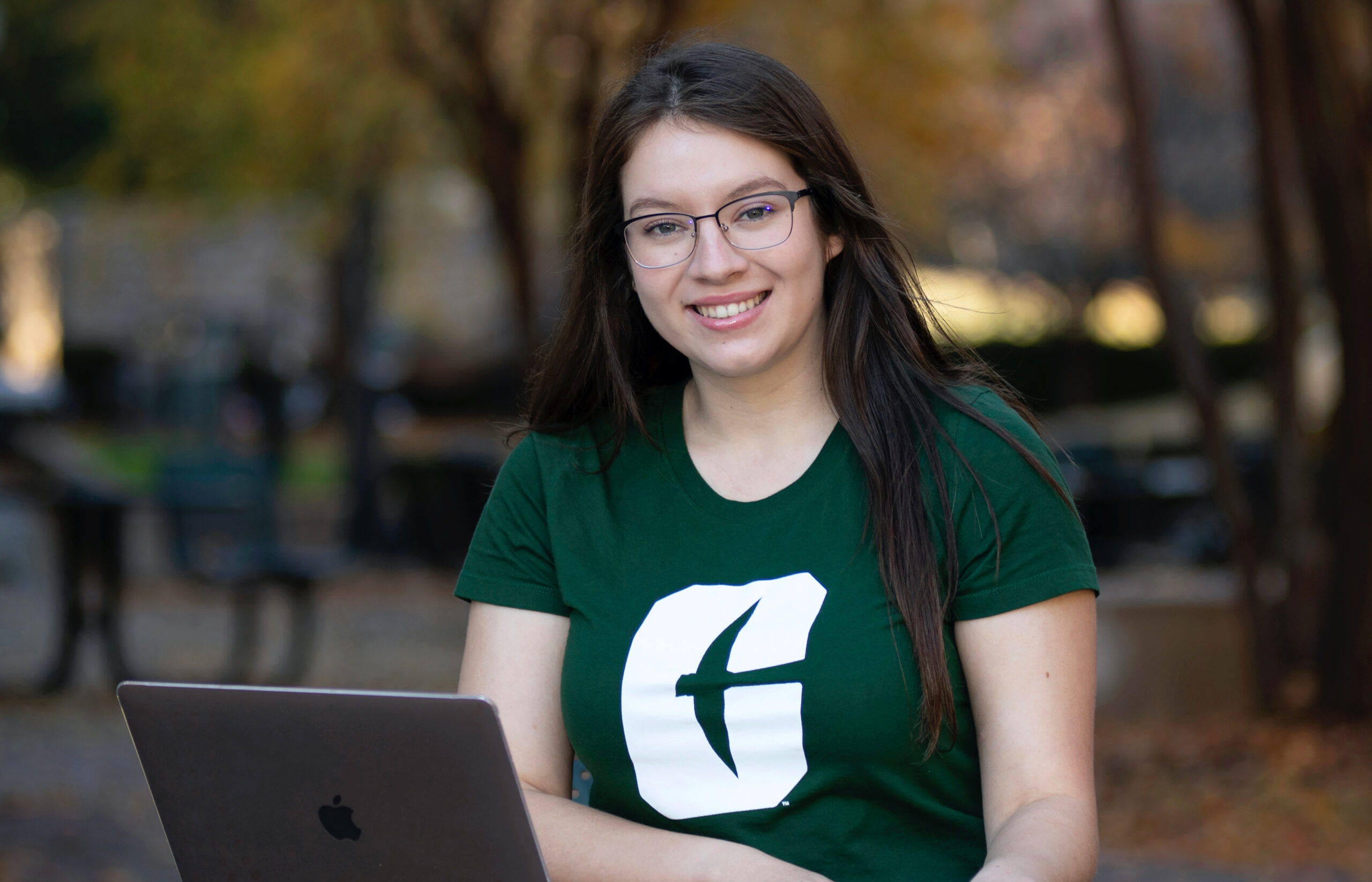 As a child, UNC Charlotte senior Betsabe Rojas Gonzalez bridged language and culture gaps for her immigrant parents and neighbors using a secondhand English-to-Spanish dictionary picked up at a Goodwill store. Later, as a first-generation college student, she connected Latino immigrant community members with resources in Charlotte.

Now, she is one of the first UNC Charlotte students or alumni ever chosen for the highly competitive Thomas R. Pickering Foreign Affairs Program graduate fellowship. Fellows receive up to $84,000 for two years of graduate studies, internships, and other professional development opportunities and have the opportunity to work as a U.S. Foreign Service officer.

“When I was younger, I knew that there were outside actors who were advocating for me. And there were other people who were determining what was going to happen to my family or to my status. Once I was granted citizenship, I realized I have to be that advocate.”

Rojas Gonzalez has felt a sense of duty to her community members and her country since she became a U.S. citizen in her teens following her family’s migration to Charlotte from rural Texcaltitlán, Mexico, when she and her twin brother Kyle were 3. She learned French and English in a language immersion program and later added Portuguese as a fourth language.

Among her latest accomplishments, Rojas Gonzalez  was also a finalist for the similarly prestigious Charles B. Rangel International Affairs Fellowship. The U.S. Department of State supports both fellowships, which are administered by Howard University. And she was a finalist for the 2021 Truman Scholarship.

Her UNC Charlotte mentors are delighted – but not surprised – by her selection in these competitive programs. Just 45 fellows were named for the Pickering fellowship from among applicants. Each year, approximately 3-5 percent of applicants have been chosen.

“Betsabe’s desire to pursue a career in public service was evident literally from her first day on our campus,” says economics Professor Ted Amato. “She communicated to me upon her arrival that her attraction to the economics major was driven by a very strong – most would say passionate – desire to become a change agent. Through her choice of internship and research experiences, Betsabe is steadily executing a purposeful plan to prepare for public service in pursuit of her ultimate objective to effect meaningful and long lasting change.”

Rojas Gonzalez crafted her plan carefully. She added a second major in political science and a minor in statistics to her economics major. She sought classes – such as game theory, to learn about motivation – and research experiences that inspired and broadened her understanding of issues and policy. She anticipates graduating in May with Business Honors and Political Science Honors.

“Before even officially meeting Betsabe, her confidence, conviction, and servant leadership were apparent, as evidenced by her research on domestic violence among migrant populations,” says Natasha W. Randle, clinical professor of management. “I knew immediately that there was something special about her and her academic achievement and leadership potential and abilities.”

Randle, who directs the Business Honors program, put at the top of her to-do list the task of finding funds for Rojas Gonzalez’s travel to a major conference to present her research. The young scholar has now presented her research at a half-dozen state and national conferences.

“Essentially,” Randle says, “she works diligently to positively impact others, her efforts are deliberate and selfless, she is clear about the need to create change versus accepting the status quo, and she does so with the science inherent in research and hard work.”

Through her continuing connection with the grassroots immigrant rights group, she data-mapped two years of Immigration and Customs Enforcement (ICE) activity in Charlotte. Reviewing every message on Comunidad Colectiva’s hotline, she found a consistent pattern of ICE activity on specific mornings in ZIP codes with the largest Hispanic populations. Her work relates to Section 287g of the Immigration and Nationality Act, which allows delegation of authority to state and local officers.

“Creating this database demonstrates Betsabe’s appreciation for the benefits of leveraging academic work as part of her policy activism,” Amato says. “Rather than merely assuming that targeting occurs, Betsabe applied her training from economics and statistics to provide evidence-based rationale for why the law should be repealed.”

In spring 2020, Rojas Gonzalez was one of 15 students nationwide chosen for the Charles B. Rangel International Affairs Summer Enrichment Program. She is the first UNC Charlotte student selected for this honor.

“At first I didn’t think it was for me,” she says. “I felt like I wouldn’t be adequate or qualified to do that. I’m an immigrant. I feel like I just got to this country. I’m from a low-income family. I’m a first-generation college student. I didn’t even know what I was doing in college yet. I felt like even if I applied, why would they pick someone like me? I kept discouraging myself because of the imposter syndrome.”

Through her selection, she grew to understand that the U.S. Foreign Service benefits from diverse people and perspectives – and she also saw tantalizing glimpses of her future. “I realized that when working with immigrant communities,” she says, “what I most liked was the international component, being able to talk to people from different countries and going back to being that bridge.”

She also was chosen for the U.S. Foreign Service Internship Program, with internships in Washington, D.C. in summer 2021 and an assignment in a U.S. Embassy or Consulate abroad planned for summer 2022.

“After I did my internship at the State Department in the Bureau of Population, Refugee, and Migration, I realized, ‘Wow, this is what I want to do.’ Being able to use my country to help other vulnerable populations around the world, that’s exactly what I want to do,” she says.

“From us being farmers when we were in Mexico to becoming a diplomat in the span of one generation, I felt like I could really do it.”

There were times along Rojas Gonzalez’s journey when she was not so sure of her future. Doubts and fatigue drained her during her 35- to 40-minute slog between UNC Charlotte and her family home each school day.

“My parents did as much as they could for me,” she says. “But in school particularly, I felt like I was all alone. I wasn’t able to make many friends because I had to work, and I had to commute back and forth, and I was taking a lot of credits. There was a moment my second semester my freshman year when I thought maybe I should drop out and work more to save up more money so I wouldn’t have to work during school. It felt really unmanageable.”

During those dark days, a professor noticed her struggles and guided her to the NinerScholars Portal. She was named a Martin Scholar, one of UNC Charlotte’s leading merit scholarship programs established by a gift from UNC Charlotte alumni Demond Martin ’97 and Kia Martin ’98. The scholarship covered her unmet financial need and allowed her to move closer to campus. She also received Latin Americans Working for Achievement (LAWA) scholarships and a Chancellor’s Scholarship.

“I do think there are certain people placed in my life that luckily were there and helped me. Whenever I reflect on the things I’ve done, I’m always grateful for the people who have led me there, because I don’t think I could have done anything by myself.”

Through her service with the Latinx Student Union Club, the honors programs and other organizations, Rojas Gonzalez seeks out opportunities to make sure other students know they are not alone. She works with Honors College leaders, including Executive Director and Professor of English Malin Pereira and Scholars Advisor Andrew Keener, to encourage students to seek help so that they, too, can pursue their dreams.

“I think I’m somebody who exemplifies the struggles of many college students – not just people who are first-generation or immigrants – who struggle with knowing if you’re enough, knowing if you’re going to be qualified,” she says. “It’s taking that first leap of faith and going after that first ‘maybe,’ as in ‘maybe this will work out for me.’ ”

For Rojas Gonzalez, her leaps of faith have landed her on a solid path to a future devoted to public service.