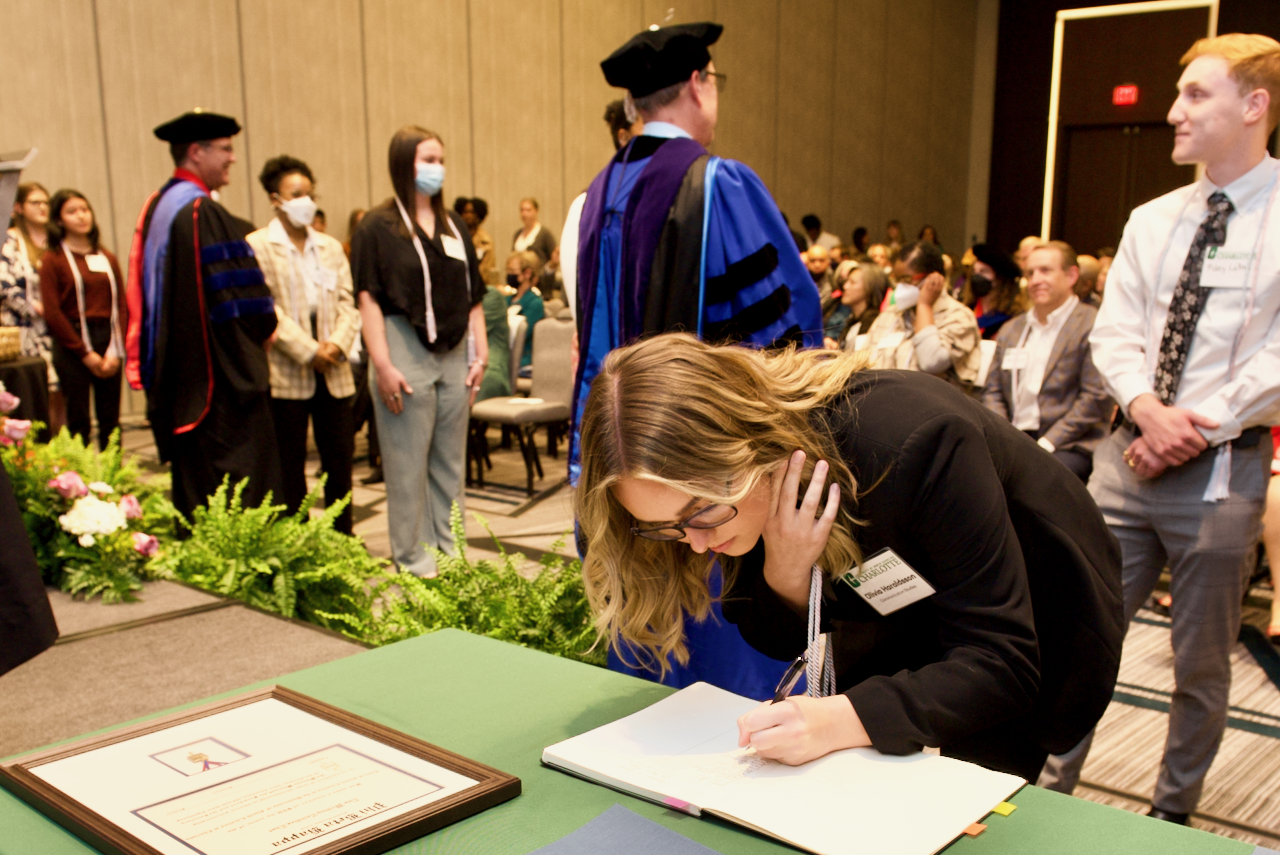 The nation’s most prestigious academic honor society, Phi Beta Kappa, installed a new chapter at UNC Charlotte on April 20. Following the installation, the new Theta of North Carolina chapter inducted 68 UNC Charlotte students, selected for their academic excellence in the arts and sciences.

“UNC Charlotte’s commitment to the liberal arts and sciences as well as its nurturing environment that allows its students to soar should be recognized and celebrated,” said Phi Beta Kappa Secretary and CEO Frederick M. Lawrence. “In a challenging time for public higher education, this commitment is an inspiration to us all. We congratulate the University and our newest Phi Beta Kappa members on their accomplishment, and we look forward to a bright future for the chapter here at Charlotte.”

Lawrence, along with Phi Beta Kappa Society President Peter Quimby and new chapter President Gregory Starrett, who is chair of the Department of Anthropology at UNC Charlotte, presided over the ceremonies at the UNC Charlotte Marriott Hotel & Conference Center.

Phi Beta Kappa scholars have achieved a foremost academic honor that signifies their curiosity, intellect, and love of learning, Gaber said. She referenced the bronze Self Made Man sculpture that stands on campus, designed by sculptor Bobbie Carlyle with the vision of a man carving himself out of stone, carving his character and carving his future.

“We don’t hear the hammer clang or the stone crack, but we can imagine it,” Gaber said. “For me, the sculpture captures both the work and the joy that comes with learning, of figuring ourselves out in a complex world. Here at Charlotte, we engage in this work together, as researchers, teachers and students, focused on investigation, discovery, and creation.”

The chapter’s creation, Starrett said, offers a significant new way to recognize current students’ academic achievements, set against the backdrop of the storied history of the University and its people.

“The honor of sheltering a chapter of Phi Beta Kappa is the result of the dedicated work of generations of faculty, students, and university staff and leaders who built this institution from the ground up after the Second World War,” he said. “They understood the vital importance of higher education’s values of learning, discovery, and the creation of new knowledge.”

During the ceremony, the chapter also inducted 11 Foundation members, each chosen for their commitment to the ideals of the liberal arts and sciences and support for the University and community, including:

UNC Charlotte is the 292nd U.S. college or university to shelter a Phi Beta Kappa chapter. Installations of new chapters occur only every three years and follow an intensive, multi-year application and evaluation process that includes significant data collection and a visit from members of Phi Beta Kappa’s Committee on Qualifications. Among the criteria reviewed are an institution’s commitment to the centrality of education in the arts and sciences, governance structure, faculty excellence, and demonstrated commitment to academic freedom.

Students inducted in 2022 are: