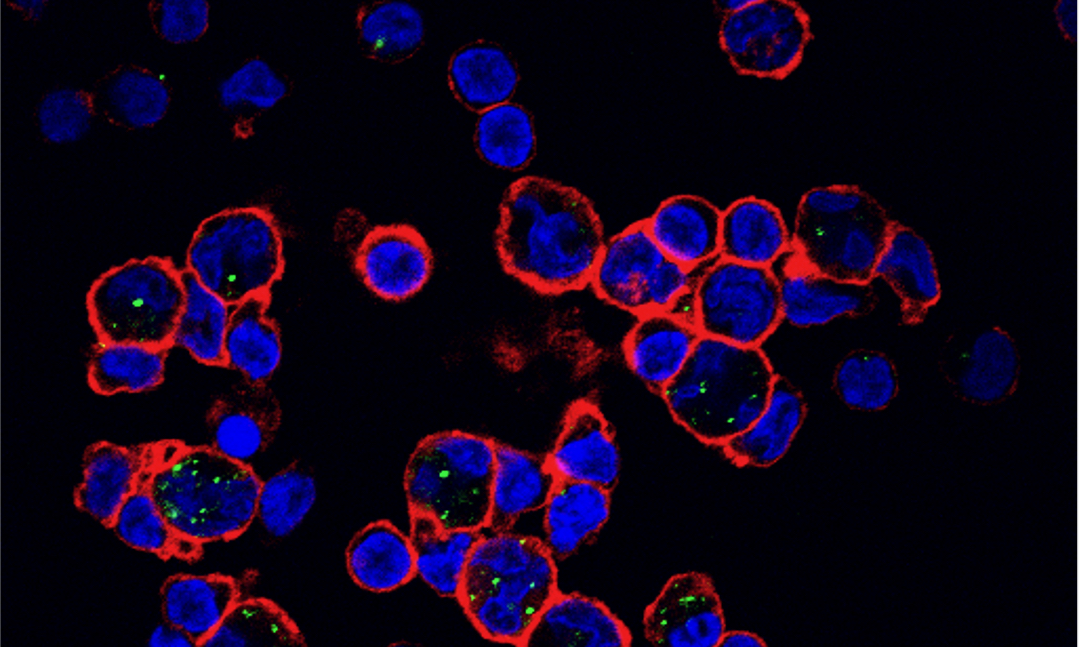 The National Cancer Institute (NCI) is showcasing nanotechnology particles designed and produced by leading UNC Charlotte researcher Kirill Afonin’s lab on the cover of a document presented to the U.S. House and Senate appropriations committees. NCI is the principal federal agency for cancer research and training.

Each year, when the president submits an annual budget, each executive agency prepares a document called the “congressional justification.” Each agency’s document explains its mission, outlines goals and objectives for the next fiscal year, and gives data and analysis of the budget request and past years’ budgets.

This year’s NCI document features an image of nanotechnology particles in a culture of blood cells developed by a team led by Afonin, a professor in the Department of Chemistry. The team developed the nano particles as part of its research on vaccine adjuvants, substances that enhance the body’s ability to produce an immune response.

Afonin and his team have collaborated closely with the NCI Nanotechnology Characterization Laboratory (NCL) at the Frederick National Laboratory for Cancer Research. The lab helps cancer researchers study nanotechnology particles and characterize them by measuring their physical and chemical properties. The research seeks applications including cancer vaccines, other cancer therapeutics, and diagnostics.

The Afonin lab’s mission is to “develop novel functional RNA-based nanomaterials that can either  communicate with each other or with cellular machinery, or be readily responsive to various stimuli.” The research seeks to improve the operation of current therapeutic systems and to engineer novel “smart” biomaterials.

Established under the National Cancer Institute Act of 1937, NCI is part of the National Institutes of Health (NIH), one of 11 agencies that make up the Department of Health and Human Services.