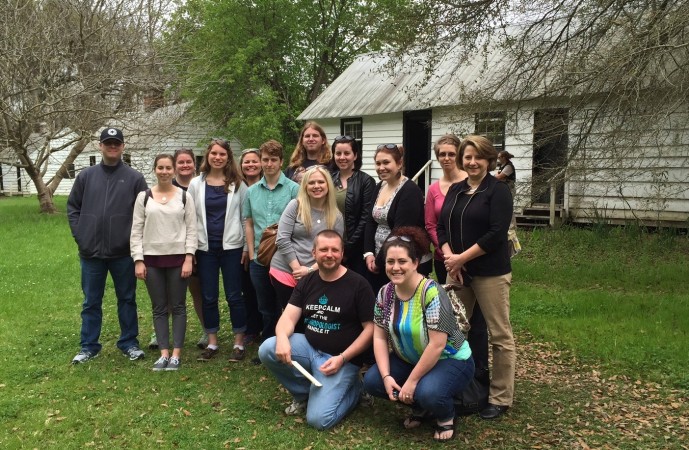 Before graduate students in Karen L. Cox’s heritage tourism class traveled to Charleston in March to experience how tourism companies and historic sites portray the city’s heritage, they read Stephanie Yuhl’s book A Golden Haze of Memory: The Making of Historic Charleston.

Some of what the students found during their visit to Charleston echoed the book’s depictions. Yet they also found more historically accurate portrayals of the city.

Cox, a professor of history at UNC Charlotte, integrated the field trip with readings and other research. The class, History 6000: Heritage Tourism, is a graduate history course that serves as a public history elective. The class consists of graduate students enrolled in three different programs – history, anthropology, and liberal studies.

“Charleston offered an excellent opportunity for students to test out some of the ideas we explored in class,” Cox said. The city is known for its heritage tourism, and as the students traveled through the city, they gained deeper insight into life in Charleston during the colonial era and beyond, she said.

The class split into two groups for part of their visit. Some students went on the Old South Carriage Tour that highlighted the city’s architecture, especially homes of the elite, while others took the Gullah Geechee Culture: Porgy & Bess Tour that chronicles Charleston’s black history. They wrote about their experiences in their blogs. “It was obvious that the tour was more entertaining stories than historically accurate,” student Bri Dancy wrote in her blog. “The tour also focuses on giving the history of the white elites in the city, while glossing over the aspects of slavery and rebellion that took place [there]. When asked about a particular rebellion (the Denmark Vesey slave revolt of 1822), the guide made it seem like a small skirmish. The tour seemed to focus more on architecture than anything else. I wish I had been able to take the African American tour of the city as well, in order to compare how different companies portray the history of the city.”

On the Porgy & Bess Tour, Layne Carpenter gained insight into the slavery that is part of Charleston’s history. The owner of the company, Al Miller, guided the tour.

“He frankly described the living conditions of slaves on the plantation and in town, the fear of slave revolts following Denmark Vessey’s uprising, the slave auction process, and the methods of slave breeding in antebellum slave society,” Carpenter wrote.

“He drove us through the east side, or as he called it ‘ghetto,’ which is the area where the white population moved the black population during the early twentieth century,” Carpenter wrote. “In this part of town, Mr. Miller showed us the works of a famous black artist and a cigar factory that employed many black residents until 1974. This area would never be included on the Old South Tour, for this section of town was clearly run-down in comparison to the homes on Rainbow Row.”

Mike Gregory lamented that his tour focused on high-dollar real estate and Gullah-Geechee culture, while he wanted to know more about the slave experience. “I am reminded of author Stephanie Yuhl’s book entitled A Golden Haze of Memory: The Making of Historic Charleston where she alludes to the fact that so much of Charleston’s painful African-American slave history has been romanticized and whitewashed to the point where it’s presented like an afterthought,” Gregory wrote.

Magnolia Plantation & Gardens was the next stop for the students. There they saw the slave cabins and the main house and learned about slavery at the site.

“One plantation in Charleston that does highlight their relationship to slavery is the Magnolia Plantation,” student Bethany Gregory wrote. “Magnolia recognizes the importance of acknowledging the vital role that Gullah people and culture play in any interpretation of low country history. By addressing this often overlooked part of the region’s narrative, Magnolia seeks to respectfully afford credit where credit is due.” Students toured the site of Magnolia’s slave cabins where the guide discussed what the slave trade was like and the experience of slavery on the Magnolia Plantation. Students were allowed to explore the cabins dating back to the 1850s and 1900s.

“Five original slave cabin structures have been preserved, four of which date to the 1850s,” wrote student Denise McClain. “Each cabin is representative of a different period in which they were occupied, from the 1850s to the 1990s. The two oldest buildings have interiors, which are in original condition in one half, and restored in the other half. Our tour guide did a good job describing the transatlantic slave trade, the growth of Low Country slave labor and conditions on the plantation. Magnolia slaves worked on the task system, in which once an assigned task was achieved, free time could be used for entrepreneurial or personal endeavors.”

Inside the main house, the tour focused on the Drayton family members occupying the house from after the Civil War until the 1920s and 1930s.

“Some of us decided to take the house tour as well,” Dancy wrote. “In 45 minutes our tour guide gave a complete history of the Drayton family and their house. It was extremely informational, yet it only highlighted Charleston elite history.”

During the tour, Yuhl’s book stayed on Dancy’s mind. “After reading Stephanie Yuhl’s book A Golden Haze of Memory, I learned things I never knew before about the preservation of the historic city and the politics involved,” she wrote. “While in Charleston I saw first-hand how white elitism still continues to shape the memory of the city today.”