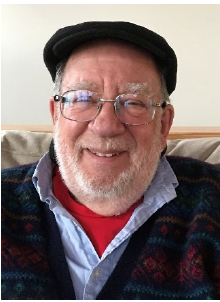 Associate Professor Emeritus Charles Denton (Denny) Fernald died October 5, 2021 at the age of 77 following a year of care provided by Hospice of the Blue Ridge. Fernald was a faculty member for 42 years in what is now the Department of Psychological Science.

Fernald completed a bachelor’s degree from University of Massachusetts Amherst, the first in his family to earn a college degree. He earned a doctoral degree in psychology from Indiana University. While at Indiana University, he met and married Sue Sampen and later settled in Charlotte.

Friends and colleagues note he loved teaching and gave tirelessly to his students, especially those who were struggling. At UNC Charlotte, he developed more than 25 different courses, many of which emphasized internships, hands-on learning, writing instruction, multiculturalism, academic integrity, and community service. Fernald held fellowships at the University of Maryland and UNC-Chapel Hill.

He was focused specifically in the areas of children and families, developmental disabilities, and caregiving. In 1989, his wife passed away, and ten years later he married Jo Ann Weinstein, who for many years directed the Office of Disability Services at UNC Charlotte. The two focused on blending their family, and one way he did this was by creating a cookbook to share his cooking skills and enjoyment of food.

The couple spent a year in Kingston Upon Thames, London while he was the UNC Charlotte faculty supervisor at Kingston University. After a semester in a teaching exchange at the University of Stirling, Scotland, he developed a study abroad program to take UNC Charlotte students to live for a month in Scotland, while they worked at a center for disabled adults and traveled around Britain. He received an international education faculty award from UNC Charlotte for his work.

Throughout his life, he was an advocate in the community, receiving honors including the North Carolina Educator of the Year Award from what was then the Association for Retarded Citizens (now The Arc). He initiated and advocated for projects that worked with individuals and organizational boards on issues of incarceration, low income, disabilities, immigration, racial justice, peace, conflict resolution, and homelessness. For ten years he provided grief counseling and advising at Urban Ministry Center. He maintained a strong spiritual connection to Iona, Scotland for more than 25 years, as an intercessor for those in need of healing.

Later in life, the Fernalds built a house in Spruce Pine and moved there fulltime upon retirement. He was an active participant with Celo Friends Meeting, serving leadership roles and helping develop Charity House Mission, which supports local people who are homeless and food insecure.

Fernald is survived by his wife of 22 years, Jo Ann, his children, grandchildren, and many other family members. Friends and family members describe him as “quiet and serious, but also quirky, lovable, funny, truth-speaking, prone to dramatic outbursts, kindhearted, and a devoted husband, father, brother, grandfather, and friend.”