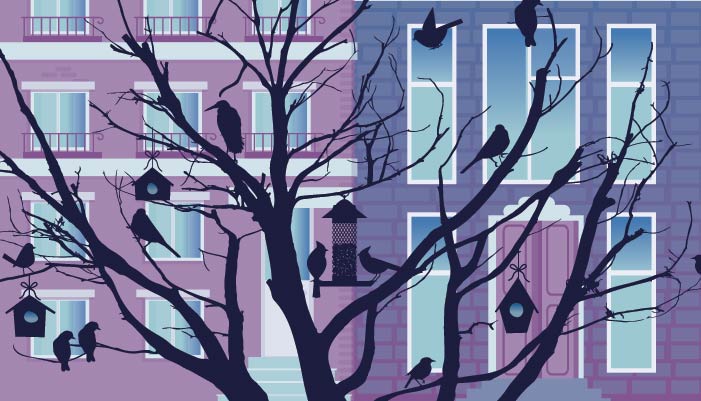 The blare of horns, the staccato notes of performers on street corners, the boisterous voices of crowds of people – these city sounds had largely fallen silent in the face of COVID-19 pandemic stay-home orders.

In the quiet that settled into urban spaces, city dwellers worldwide have told stories of connecting with birds around their homes and hearing birdsongs no longer drowned out by other sounds.

Now, as pandemic restrictions begin to lift and cities start to bustle, we take a closer look at UNC Charlotte research into urban intensification and its impact on forest birds.

UNC Charlotte landscape ecologist Sara Gagné published a study last academic year in the journal PLOS ONE with two of her former UNC Charlotte graduate students – lead author Grant Paton and Alexandra Shoffner, who both earned master’s degrees in earth sciences from UNC Charlotte. The fourth author is Andrew M. Wilson, one of the editors of the study’s data source, the Second Pennsylvania Breeding Bird Atlas.

The study posed a basic question: what characteristics of forest bird species make them more or less vulnerable to urbanization?

“The trend in my field of science right now is to look at the species traits – what it eats, where it nests, and other traits – and to find the underlying mechanisms as to why some do well in this environment, and others do well in a different environment,” Gagné said.

In 2014, 54% of the world’s population lived in urban areas, with 66% expected to live in urban settings by 2050. Growing cities can mean changes in birds’ movement patterns, altered access to resources, increased collisions with buildings, reduced forest patches, and increases in noise, air temperature, pollution, and domestic cats hunting them.

“Large scale urbanization has been one of the major environmental shifts that occurred in approximately the last century, and as our population expands, it will continue to be a pressing issue.”

“Making sure that human environments are not excluding the natural environments birds are nested within is likely going to be a huge key in species preservation,” he said. “And birds are an interesting wrinkle in that equation because they can fly, and therefore have more of a choice in the urban environments they use.

Figuring out which areas of a city are best for birds, and why, can give clues on how to better modify urban space for the other kinds of animals.”

Some bird species have traits that take advantage of new opportunities.

“I found it interesting that people have this misconception that all forest birds are negatively impacted by urbanization, and that was not the case,” Gagné said. “Our study found that 32% of the species were actually positively affected by the impacts of urbanization. Those were technically forest birds, and it was a positive and somewhat heartwarming result.”

Using a large point count dataset from the bird atlas, the researchers tested for the effects of species traits on the magnitude and spatial scale of 58 forest bird species’ responses to urbanization intensity. They found that the birds that are less vulnerable to urbanization are those that feed on seeds and grains, or fruits; that build nests, lay eggs and raise their young inside sheltered chambers or cavities; and that have larger sized clutches of eggs and more fledglings per clutch.

The impact of urbanization intensity on forest birds was seen most strongly at larger spatial scales for granivorous, frugivorous or omnivorous species that are cavity-nesting, have larger clutch sizes and longer wingspans, and flock in larger numbers, the study found.

The researchers believe the study represents the first direct tests of the effects of species traits on both the magnitude and spatial scale of the effect of urbanization on forest birds, as well as the first evidence that migratory status, clutch size, wingspan, and fledglings per clutch are important determinants of the responses of forest birds to urbanization.

The research is the second phase of a two-part study using the same data set and landscapes. The earlier study looked at the relative contribution to forest bird diversity. The three components used were the concentration of people in dwellings, the amount of forest habitat in a landscape, and the spatial arrangement of forest habitat – or whether it is broken up into bits, or is one big area.

“The first part was just understanding how urbanization affected bird species in general, and we found it was second only to the forest landscape,” Gagné said.

This study and many others that researcher Sara Gagné, students, and colleagues have done center on the broad question of how urbanization affects biodiversity.

Research areas of emphasis include: determining whether the sizes of urban structures dictate the sizes of bird species found in cities; conducting a survey of Southeastern U.S. planners about the type and format of information that they need to conserve biodiversity in their jurisdictions; quantifying bird species likeability; and cataloging the types of invertebrates that occur on Charlotte’s green roofs and identifying the factors that explain their occurrence.