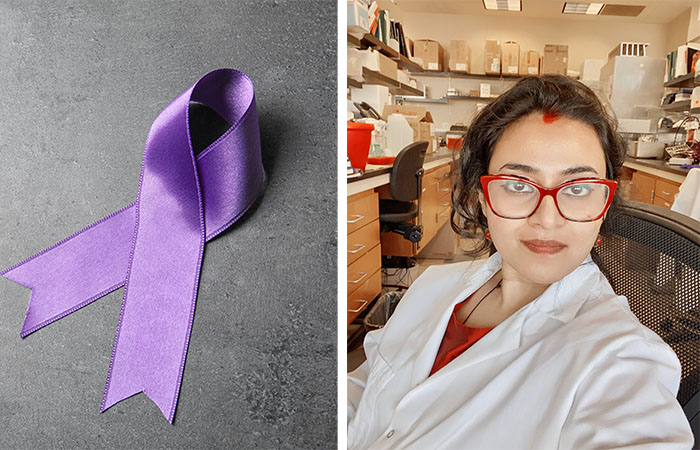 An antibody that was invented at UNC Charlotte could be used to curb pancreatic cancer relapse and metastasis, a new UNC Charlotte study has found.

Pancreatic cancer is particularly cruel  — and deadly. While it is the 10th most common type  of cancer, it is the fourth leading cause of cancer death among men and women in the U.S., reflecting its bleak survival rate.

Each November, Pancreatic Cancer Awareness Month calls attention to this silent killer. The cancer has very few symptoms, especially in early stages, meaning it often spreads and forms additional tumors before it is diagnosed. This year’s Annual Report to the Nation on the Status of Cancer, out in October, highlights its grim trends.

Yet, there is hope for improved treatment options. UNC Charlotte researchers are among those leading the search for solutions, including the new research by Mukulika Bose ’22 Ph.D. and collaborators, including Bose’s mentor Pinku Mukherjee, published in the journal Translational Research.

Bose’s groundbreaking research studies TAB004, a patented antibody generated by Mukherjee, who is the Irwin Belk Endowed Professor of Cancer Research and a study co-author.

Patients die due to metastatic secondary tumors more than from primary tumors, making the new study highly impactful. The antibody targets a tumor protein called tMUC1 (t muck one) and blocks its cellular signaling that is critical for tumor progression and metastasis.

Surprisingly, Bose found that the antibody TAB004 was not effective in targeting solid tumors. She instead found that this antibody could precisely target single tumor cells that had just detached from their parent tumor.

To understand why this was happening, Bose turned to the cell biology of normal healthy cells. Epithelial cells form the tissues that make up our organs, mucus membranes, and skin. To maintain the integrity of these structures, cells form a network of proteins called the extracellular matrix. When cells that interact with this matrix need to undergo programmed cell death, they can induce anoikis, as the cells detach from the extracellular matrix and induces programmed cell death. Anoikis translates in Greek to the word homelessness.

Unlike normal epithelial cells, cancer cells acquire resistance to anoikis, Bose said. This means that when cancer cells detach from the extracellular matrix, they avoid cell death. These cells are then free to travel through the circulatory and lymphatic systems to cause havoc elsewhere in the body.

“We used the antibody to destroy anoikis resistance and the ability of the ‘homeless cancer cells’ to remain alive after detaching from the primary tumor,” she said. “They then undergo cell death and cannot form a secondary tumor after treatment with the antibody.”

Cancer cells take two shapes, one that is more rounded, and one that has extensions that are sticky due to the presence of the tMUC1 protein. The second shape, with its stickiness, allows them to grip onto the surface of tissues and organs, somewhat like suction cups. The study found that the antibody TAB004 attaches to the tMUC1 protein and stops the cells from taking the shape with extensions.

“Cells in their rounded shape are not able to grip anywhere,” Bose said. “After a few days of treatment with the antibody, the extended cells round up and finally die.”

Treatment with the antibody showed significant reduction of tumor growth in mouse models. Besides pancreatic cancer, the antibody can target the tMUC1 protein in breast, ovarian and liver cancer cells.

Other possible applications for this antibody as a therapeutic agent include using it in combination with chemotherapy drugs and and as a targeted agent with nanoparticles.  More pre-clinical studies, including more mouse models, are needed before the research could move to clinical trials, but this study moves the research closer to the goal of clinical trials.

“My hope,” Bose says, “is that we can outsmart cancer and tame it down to a chronic disease. We should be able to extract the fear from people’s minds, that scientists and physicians together have worked to such a degree that people don’t think it’s the end of the world. That is what motivates me.”

After defending her doctoral thesis in June, Bose joined the Dana-Farber Cancer Institute at Harvard Medical School as a postdoctoral fellow. While at Charlotte, Bose was awarded the 2022 Phi Kappa Phi Dissertation Fellowship, as one of ten students selected nationally for this award and the first student to receive it at Charlotte.