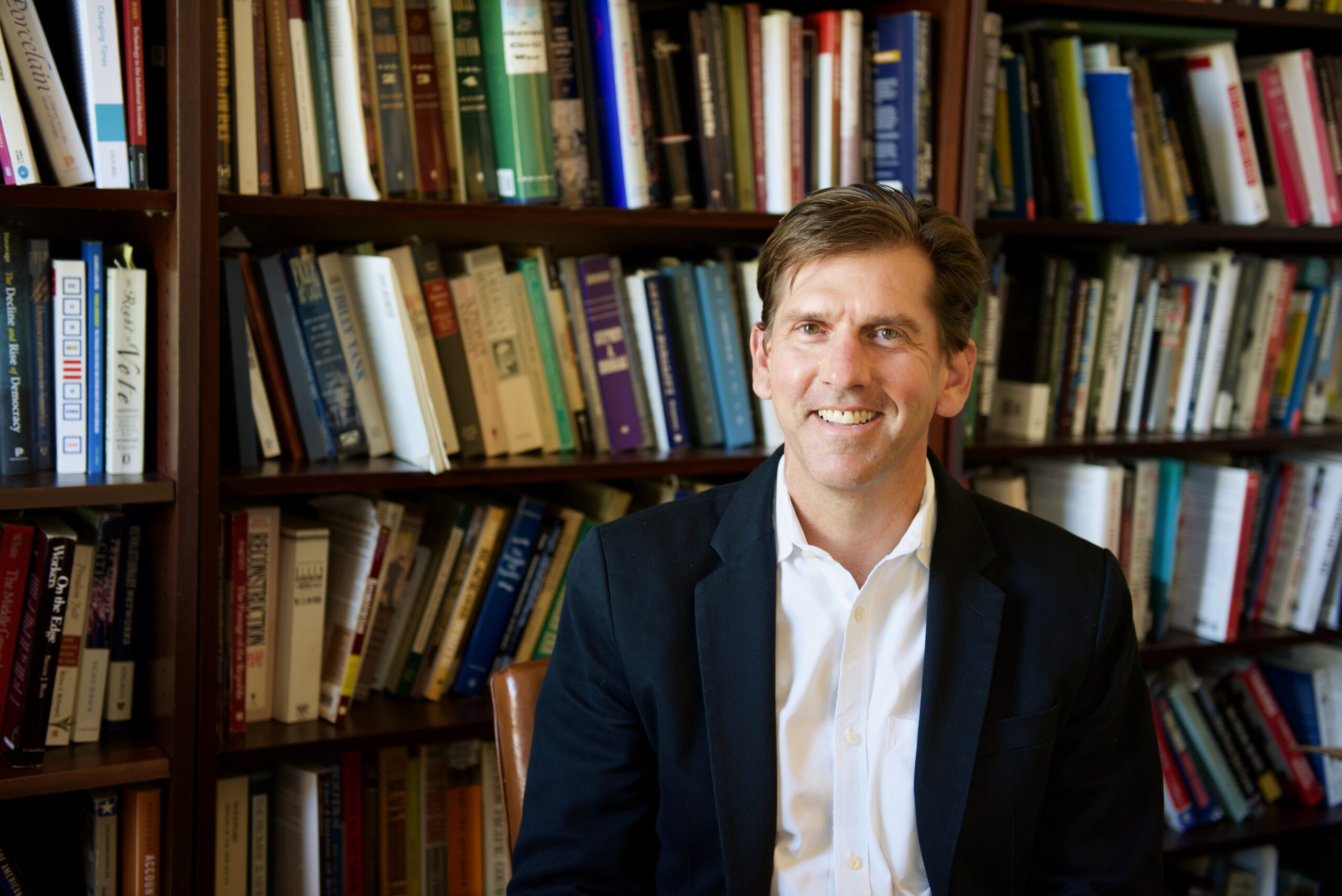 UNC Charlotte Professor of History Mark Wilson is one of 28 exceptional scholars, journalists and authors chosen as members of the 2022 Class of Andrew Carnegie Fellows.

The fellows, announced on April 26 by Carnegie Corporation of New York, will receive a $200,000 stipend to make it possible to devote time to significant research and writing in the social sciences and humanities. This year’s commitment totals $5.6 million in philanthropic support. The recipients were chosen from nearly 300 nominations.

Wilson’s project will provide the first thorough history of the U.S. defense industry, reviewing the business and politics of the modern defense sector from 1950 to the present to understand declining public oversight and growing privatization and globalization. The project is a multi-generational story including multiple perspectives, adding to its complexity and significance.

“The American military-industrial complex is an important part of our economy and society that now costs close to $1 trillion a year,” Wilson said. “I’m focused on creating a richer and more illuminating account of its history, since the beginning of the Cold War. This new history should provide policymakers and voters with valuable information about how the U.S. defense sector works, and how it has evolved over time; in doing so, it may give people ideas for positive reforms moving into the future.”

The generous support, Wilson said, will allow him to complete the research for a book titled “The Degradation of Defense: The Transformation of the US Military-Industrial Complex, 1950-2025.”

He is drawing upon expertise he has developed over the past three decades in the fields of business history, military history, and the history of policy and politics. Over the past five years, he has gathered evidence from unique archives, including presidential libraries, records of defense contractors, and papers and oral histories of members of Congress, defense officials, military officers, and defense industry leaders. He also has conducted dozens of interviews for the project.

Rare among historians, Chancellor Sharon L. Gaber said in a nomination letter, Wilson has become an authority on the history of military-industrial relations in three separate time periods, the Civil War, World War II and the Cold War. “Dr. Wilson has endeavored to make his mark in new areas, getting a deep understanding of the evolution of military-industrial relations across a broad swath of time,” Gaber wrote.

His previous two books received strong responses. In particular, “Destructive Creation: American Business and the Winning of World War II” (Philadelphia: University of Pennsylvania Press, 2016), was named winner of the Hagley Prize for best book in business history and co-winner of the Ralph Gomory Prize, which honors historical work on the effects of business enterprises on the economic conditions of the countries in which they operate. Wilson also is director of the Capitalism Studies program at UNC Charlotte.

The Andrew Carnegie Fellows Program, founded in 2015, involves a competitive nomination and selection process. It is the most generous stipend of its kind, and to date, the program has named 244 fellows, representing a philanthropic investment of $48.8 million. Selection criteria prioritize the originality and promise of the research, its potential impact on the field, and the scholar’s plans for communicating the findings to a broad audience.

“In recent years, as we have looked to respond to our world’s most complex problems, the Carnegie Fellows have provided important contributions through their exceptional research, pursuit of knowledge, and creative approaches,” said John J. DeGioia, chair of the Andrew Carnegie Fellows Program jury and president of Georgetown University. “Our panel of jurors were gratified and inspired by the caliber of the research proposals. We believe that this year’s fellows show extraordinary potential for lasting impact.”

As part of the nomination process, more than 600 individuals — including heads of independent research institutes, societies, and think tanks; university presidents; directors of major university presses; and editors of leading newspapers and magazines — were invited to recommend up to two individuals for consideration. All proposals undergo a preliminary, anonymous evaluation by leading authorities in the relevant fields. The top proposals are then forwarded to the jury for a final review and selection.

The Andrew Carnegie Fellows Program is a continuation of the mission of Carnegie Corporation of New York, as founded by Andrew Carnegie in 1911, to promote the advancement and diffusion of knowledge and understanding. The award is for a period of up to two years, and while the anticipated result is generally a book or major study, the Class of 2022 will also result in an art installation, software applications, and digital platforms.