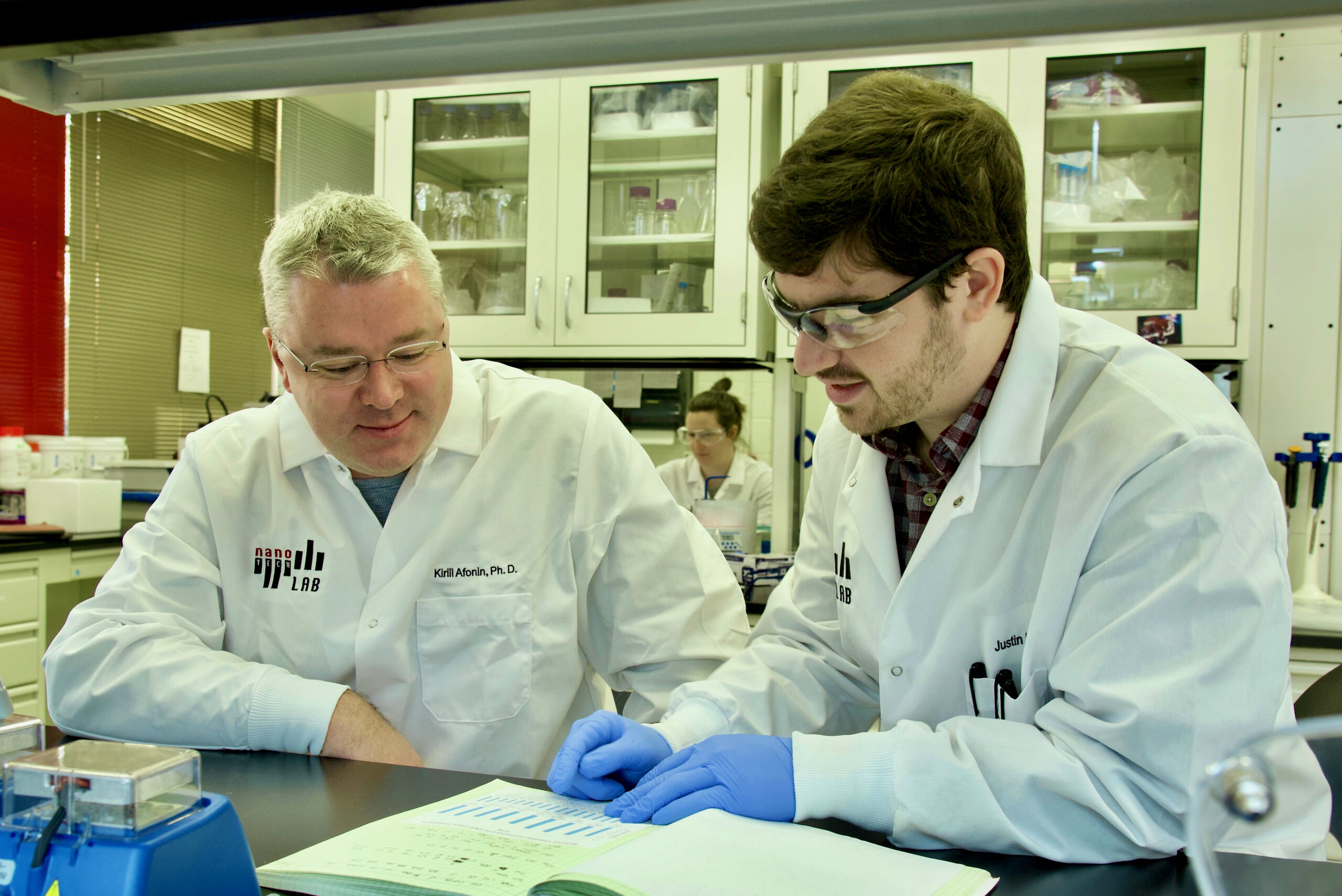 While blood clotting is important to prevent blood loss and for our immunity, coagulation also can cause health issues and even death. Currently, one in four people worldwide dies from diseases and conditions caused by blood clots. Meanwhile, anticoagulants used to reduce risks can also cause significant issues, such as uncontrolled bleeding.

Now, a new biomolecular anticoagulant platform invented by a team led by UNC Charlotte researcher Kirill Afonin holds promise as a revolutionary advancement over the blood thinners currently used during surgeries and other procedures. The team’s discoveries are reported in the journal Nano Letters, first available online on July 5.

“We envision the uses of our new anticoagulant platform would be during coronary artery bypass surgeries, kidney dialysis, and a variety of vascular, surgical and coronary interventions,” Afonin said. “We are now investigating if there are potential future applications with cancer treatments to prevent metastasis and also in addressing the needs of malaria, which can cause coagulation issues.”

The paper shares the most recent results from three years of collaboration among researchers with the Frederick National Laboratory for Cancer Research (Nanotechnology Characterization Laboratory), University of São Paulo in Brazil, The Pennsylvania State University, and Uniformed Services University of the Health Sciences.

“All this resulted in a massive international and interdisciplinary effort to develop a completely new technology that we think may revolutionize the field and be picked up by other areas of health research,” Afonin said.

The team’s technology turns to programmable RNA-DNA anticoagulant fibers that, when injected into the bloodstream, form into modular structures that communicate with thrombin, which are the enzymes in blood plasma that cause blood to clot. The technology allows the structures to prevent blood clotting as it is needed, then be swiftly eliminated from the body by the renal system once the work is done.

The fiber structures use aptamers, short sequences of DNA or RNA designed to specifically bind and inactivate thrombin.

“Instead of having a single small molecule that deactivates thrombin,” Afonin said, “we now have a relatively large structure that has hundreds of the aptamers on its surface that can bind to thrombin and deactivate them. And because the structure becomes larger, it will circulate in the bloodstream for a significantly longer time than traditional options.”

The extended circulation in the bloodstream allows for a single injection, instead of multiple doses. The design also decreases the concentration of anticoagulants in the blood, resulting in less stress on the body’s renal and other systems, Afonin said.

This technology also introduces a novel “kill-switch” mechanism. A second injection reverses the fiber structure’s anticoagulant function, allowing the fibers to metabolize into materials that are tiny, harmless, inactive and easily excreted by the renal system.

The entire process takes place outside the cell, through extracellular communication with the thrombin. The researchers note that this is important as immunological reactions do not appear to occur, based on their extensive studies.

The team has tested and validated the platform using computer models, human blood and various animal models. “We conducted proof-of-concept studies using freshly collected human blood from donors in the U.S. and in Brazil to address a potential inter donor variability,” Afonin said.

The technology may provide a foundation for other biomedical applications that require communication via the extracellular environment in patients, he said. “Thrombin is just one potential application,” he said. “Whatever you want to deactivate extracellularly, without entering the cells, we believe you can. That potentially means that any blood protein, any cell surface receptors, maybe antibodies and toxins, are possible.”

The technique permits the design of structures of any shape desired, with the kill switch mechanism intact. “By changing the shape, we can have them go into different parts of the body, so we can change the distribution,” Afonin said. “It gets an extra layer of sophistication of what it can do.”

While the application is sophisticated, production of the structures is relatively easy. “The shelf life is amazingly good for these formulations,” Afonin said. “They’re very stable, so you can dry them, and we anticipate they will stay for years at ambient temperatures, which makes them very accessible to economically challenged areas of the world.”

While the researchers’ work so far has relevance for short-term applications, such as in surgeries, they hope to possibly extend their research into maintenance situations, such as with medications that patients with heart conditions take.

The potential for saving lives and improving health care is a motivator for the team, as is inventing something new, Afonin said.

“We can learn from nature, but we have built something that has never been introduced before. So, we develop and build all these platforms de novo – from scratch. And then we can explain through our platforms what we want nature – or our bodies – to do and our bodies understand us.”

UNC Charlotte’s Office of Research Commercialization and Development is working closely with Penn State to patent and bring this new technology to market.