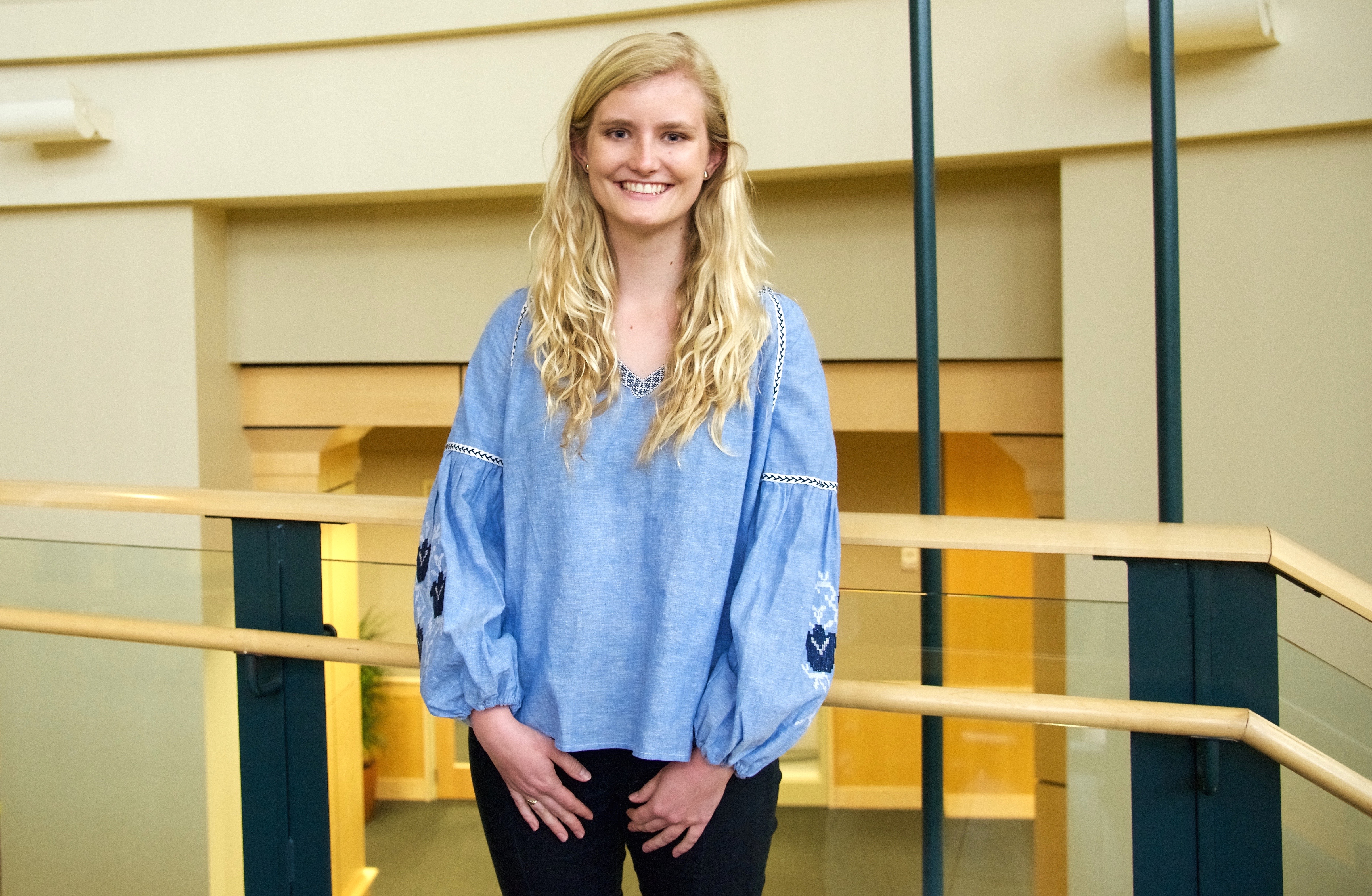 With her selection as UNC Charlotte’s first-ever Ertegun Graduate Scholar, UNC Charlotte’s Eileen Jakeway is headed to England’s University of Oxford, for what she anticipates will be one of the most intellectually rich and invigorating experiences of her life.

Jakeway, a Levine Scholar and English Honors student who graduates in May with bachelor’s degrees in English, French and German, will conduct graduate studies in comparative literature. Each year, only about 20 full-time graduate students in the Humanities are chosen from throughout the world to receive the scholarships.

“Getting into Oxford, and on top of that receiving the Ertegun was an important validation that I was able to take charge of my education,” Jakeway says.

Jakeway has truly stood out in her four years in the College of Liberal Arts & Sciences at UNC Charlotte, says Nancy A. Gutierrez, college dean. “Her commitment to language study is extraordinary, but beyond that, she has shown creativity and passion in her learning and has been an active member of our community through her service, including as a member of the Dean’s student advisory group,” Gutierrez says. “We could not be more proud.”

While at UNC Charlotte, Jakeway has collaborated with her faculty mentors to extend her classroom education through independent research and study abroad in France, Germany and South Africa. She has presented her research at professional academic conferences across two continents.

“Eileen’s incredible work ethic, intellectual curiosity, and dedication to sharing her love of literature with others has guided her scholarly pursuits and her civic engagement activities,” says Diane Zablotsky, director of the Levine Scholars Program at UNC Charlotte. “She has served as an outstanding role model and mentor for other Levine Scholars and fellow undergraduate students.”

Jakeway earned a first prize in the Charlotte Research Scholars Symposium in 2016 for her work on 16th-century French poet Gabrielle de Coignard. Through the Charlotte Research Scholars program, which provides undergraduate research opportunities, she worked closely with French professor Allison Stedman to examine the epic poem, the Imitation de la victoire de Judich (Imitation of Judith’s Victory.) The Levine Scholars Program provided funding for her to do archival research at the French National Library in Paris, where Stedman was also working.

“My set of skills is very much in tune with creating research and thinking about texts in new ways,” Jakeway says. “It’s very important to continue this sort of literary scholarship to bring voices of marginalized groups to the surface, particularly women, who I am interested in studying.”

She envisions herself producing meaningful knowledge through research while also being responsible for educating young minds and working with students as a professor of comparative literature. “To me, I can’t do one without the other,” she says. “I don’t want to be an academic that only deals with abstract terms and theories. I really want to make this research meaningful to a broader audience of people.”

Much of her research has focused on devotional literature written by laywomen. “This is a doubly marginalized group, because usually religious literature is not really regarded as having the same literary merit as the sort of canonized or secular literature,” she says. “And even when religious literature is studied, mostly the literature is written by people who have previously been published, such as in convents or monasteries. So, laywomen in their own lives, how they are coping with their surroundings, that is a new frontier that has not really been valorized much as it could be.”

By understanding texts from the 1500s and the 1600s, we can understand historical diversity more deeply and draw lessons that resonate today, Jakeway says.

“I think it’s important because it shows us that there are all these different discourses and different groups of people, much as occurs today,” she says. “Just because we don’t see people does not mean they’re not there. It teaches you to think about the world in a way that makes you more sensitive to the different voices that are out there.”

In addition to Stedman and Zablotsky, Jakeway also counts Ron Lunsford and Anabel Aliaga-Buchenau among her primary mentors.

“I am so grateful to have had my four years here at UNC Charlotte,” she says. “Having this individual autonomy and support from the Levine Scholars Program and also from my mentors, particularly Dr. Allison Stedman, and that sort of intellectual and professional support, has prepared me for this opportunity. It shows that here at UNC Charlotte, we are in a dynamic environment that is vibrant and that is rich and that offers many opportunities for students to really thrive in their own directions.”