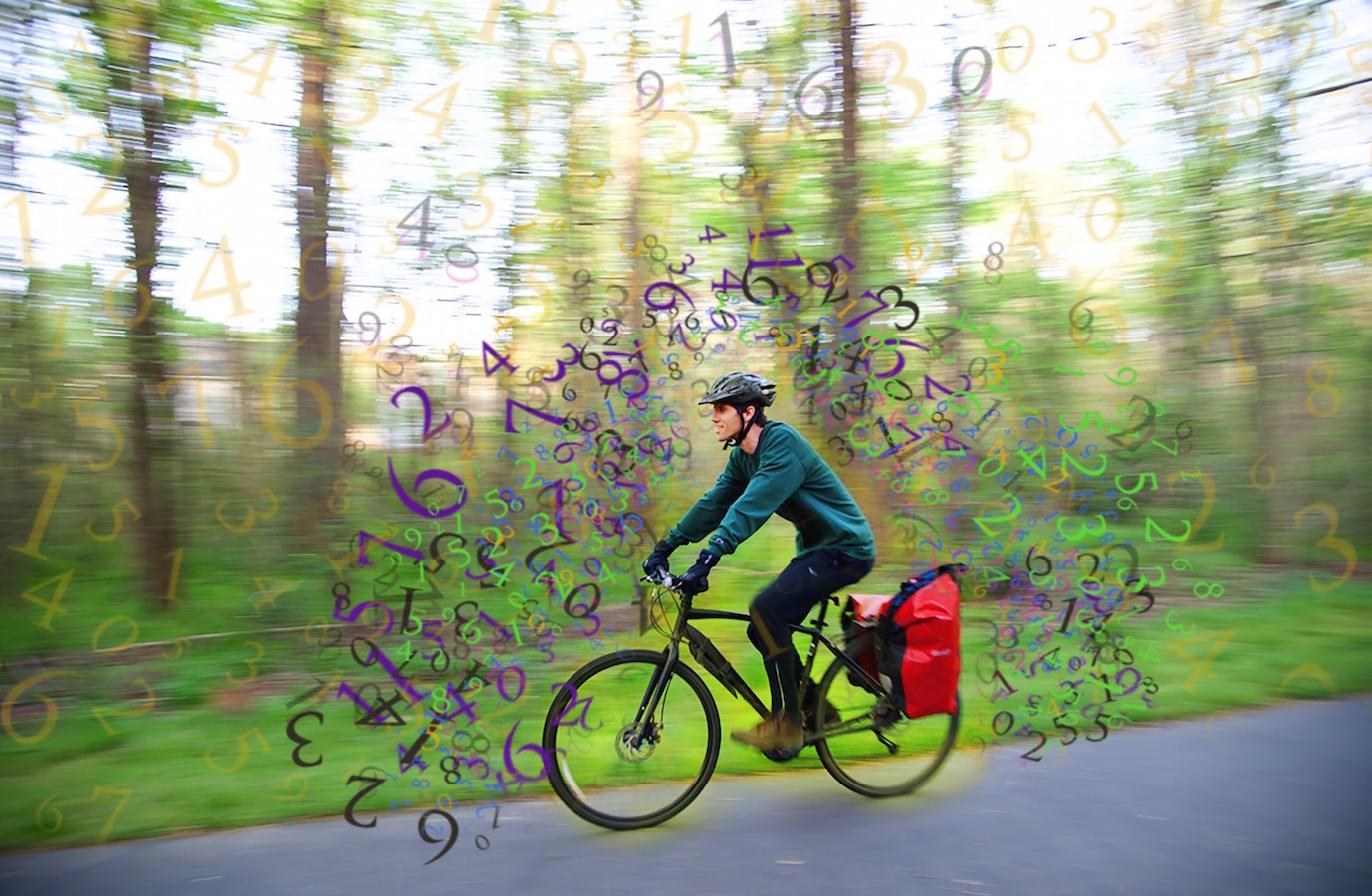 Mathematical equations cycle through Kevin McGoff’s mind, as he pedals his bike on the system of greenways in north Charlotte.

The UNC Charlotte mathematician’s thoughts shift into gear, centered on problems associated with his field of study – dynamical systems. Dynamical systems serve as important mathematical models for a wide array of physical phenomena, relating to things such as weather modeling, systems biology, the spread of disease, and statistical physics, for example.

In mathematical terms, such a system consists of a state space, in which a point represents a complete description of the system, and a rule governing the evolution of the system from one state to another. These basically are units whose state evolves over time according to a kind of logic or rule.

On this day on the greenway, the verdant greenery that envelops McGoff, the ground beneath him, and the air he breathes, are all parts of a massive dynamical system – the Earth itself. In McGoff’s case, curiosity about Earth as a system was the original spark for what has grown into a research focus with implications for disease and other societal issues.

In one area of research, McGoff collaborates with epidemiologists who are studying the spread of diseases in populations and the dynamical effects that come into play within organisms. He currently is working with biologists to study malaria, work that grew from seeing system similarities through work with dynamical systems associated with circadian rhythms.

“You have these parasites that get into your body, and they essentially overwhelm your immune system in a dynamic way,” he says. “They all burst out of their cells at the same time, and then they swarm your immune system, and that’s when you get these spiking high fevers. That happens periodically.” d to understand how this happens. “There must be some underlying dynamical system which tells them when to burst out.,” McGoff says. “If we can now study these parasites through observations of their genetic behavior over time – dynamic signatures of their genetics – the hope would be that we could understand what program is encoded in their DNA that allows them to coordinate their behavior. Of course, if we can understand what’s making them work, then the next step is how to break it.”

McGoff and colleagues have published in journals including Genome Biology, The Annals of Probability, and The Annals of Statistics and other publications. He continues to explore the theoretical side of dynamical systems, while he also collaborates on practical applications. Both have a place in research in this field, he says.

“Beginning with concrete examples of systems and then abstracting the relevant properties is often a good way to find interesting theoretical questions for further study,” he says.

McGoff has received National Science Foundation funding to focus on characterizing when traditional statistical procedures may be effectively applied in the context of dynamical systems.

“Imagine that you’re a scientist, and you want to understand the way a certain system works,” McGoff says. “You might have some form of equations that you think makes sense, but you want to know what exact parameters should I choose for this, or at a bigger level, what form of equations should I even select as a model for my data?”

In one discovery, McGoff has found a way to describe what he calls a random dynamical system.

“You basically have a big bag of dynamical systems,” he says. “And, a lot of what has been done in the past has been to pick one out specifically and look very carefully at it and understand how it works. One approach I looked at in specific cases was to select one at random and ask, “What does that one look like?” This helps to characterize what typical systems do, which can have more relevance for the real world. If you looked out into the world, what behavior would you expect to see? You would expect to see typical behavior. But, what is that? You need some way of choosing a system at random and then asking what it does.”

As McGoff works with undergraduate and graduate students, he reminds them of the need to continue to take varying views of problems and to consider things for different perspectives.

“Always take a different approach,” he says. “When an approach works, it just flows. An idea can come at a completely random time, like the shower in the morning or on a bike ride. When you have an idea, and the consequences just start flowing, and when you get that cascading effect of ideas, you know you’re onto something.”