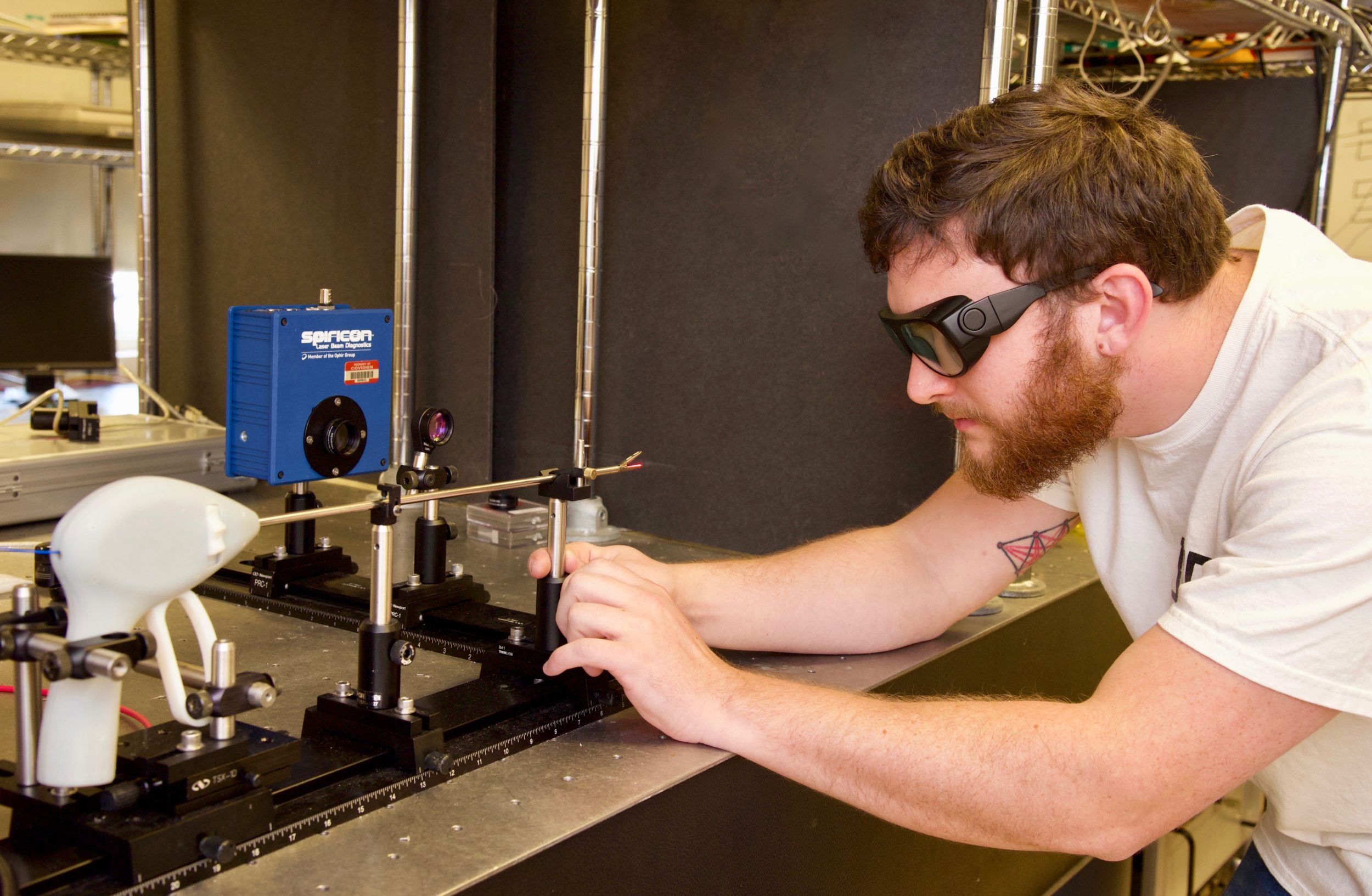 The pain can be excruciating – a stabbing sensation in the side, abdomen or back. It can start in one spot in the intestinal tract, then spread. The agony can bring people to tears – and, often, to the hospital emergency room.

This suffering is caused by stones, the pebble-like lumps of minerals and salts that can form in a person’s urinary tract. While the stones themselves can be as small as grains of sand, their impact can extend beyond the initial diagnosis and discomfort.

“Most North Carolinians have known someone who has had kidney or bladder stones,” says UNC Charlotte student Luke Hardy, who is pursuing a doctoral degree in optical science and engineering. “We’re in what is called the Stone Belt. The Southeastern part of the United States, including North Carolina, South Carolina, and Virginia, has more kidney stone occurrences than other places, about a 50% greater prevalence of stone disease.”

Stone Incidence, And The Costs, Increase

With the incidence of stones increasing not only in the Southeast but elsewhere too, due to increasing obesity, diabetes, dietary factors, and even climate change, Nathaniel Fried’s research lab in the Department of Physics and Optical Science at UNC Charlotte is working to transform treatment options. Hardy is an integral member of the research team.

“Luke is a highly accelerated student by all measures,” Fried says. “One of his greatest strengths is that he works extremely hard. He’s very focused and a very serious student. It’s his curiosity, his heart, his work ethic, and his productivity. He’s just done so much. He’s really a role model for other students.”

Hardy first joined Fried’s lab as an undergraduate physics student participating in the Charlotte Research Scholars program in the summer of 2013. Since then, he has been a co-author on over a dozen peer-reviewed papers and a similar number of conference proceedings. He also received a 2017 Optics and Photonics Education Scholarship from SPIE, the international society for optics and photonics.

“I like learning things and figuring things out, and I’ve always wanted to use that interest in helping people in some way,” Hardy says. “I felt like this work was a good way to do that.” The specific area of research is called biomedical optics and laser-tissue interactions, mostly occurring in the therapeutic realm. “You can think about it as minimally invasive surgery using lasers, optics and/or fiber optics,” Fried says. “We do a little bit of optical imaging and what I would call diagnostics, diagnosing disease or characterizing abnormalities. But most of the work is on the therapy side for treatment.”

The research is exploring less invasive surgical options, seeking to speed recovery time, decrease complications and time spent in surgery, and reduce costs for patients and the health care system. That is where the innovative devices that Fried’s lab develops come in.

“There has been little or no evolution in laser technology for treating kidney stones in the last 30 years or so,” Fried says. “We are one of only a few academic labs that I know of in the world that is trying to introduce new laser technology for breaking up kidney stones. The conventional technology has been around for almost 30 years. The technology that Luke is working on in the lab as part of his project allows us to miniaturize the optical fiber delivery system, and perhaps the endoscope as well, that goes inside the body.”

Hardy counts his work with the Thulium fiber laser for breaking up kidney stones as some of his most productive.

When a stone breaks up, it can bounce around, much like a pinball in a pinball machine. Pieces can be missed, requiring more surgery, or the patient has to let the fragment pass while the urinary tract is still healing. If a stone moves around during the procedure, the surgery also can take longer, which is costly and potentially more risky for the patient.

While much of his work has focused on the actual lasers and probes, Hardy also has branched into computer simulations. With this work, the team is researching treatment options that use non-invasive lasers and their thermal effect to remodel subsurface tissues to treat female stress urinary incontinence. Currently, women either learn to live with the condition or turn to more extensive surgical options, such as mesh slings.  One of the major themes in the lab’s research is developing options for the use of lasers in urology, with implications for quality of life issues. Hardy also took a six-month turn in space exploration as an intern at the Jet Propulsion Laboratory of the California Institute of Technology in Pasadena, California, starting last summer. “There’s the kid part of me that was drawn to this lab, and then there’s the practical side, in that I wanted to expand my research beyond what I had done at UNC Charlotte,” he says.

He is exploring whether he wants to pursue a post-doctoral research position in academia or a post in industry. Either way, the work continues to fascinate him, particularly when he stops to reflect on the power of light.

“Using light to break up a kidney stone is so cool,” he says. “We are used to ambient light – very low level light – and we don’t really think of light interacting to heat something up and then break it apart. It’s amazing. The fact that we can create enough coherent light to melt something is a testament to innovation.”

As president of UNC Charlotte’s SPIE/OSA student chapter, Hardy works with his peers in volunteer projects, such as the university’s Science and Technology Expo and visits to schools. He remembers wanting to be a sound engineer, as a high school student at the Middle College at GTCC-High Point, and he still plays bass in a band. When he came to UNC Charlotte to study physics, he realized the parallels between sound waves and light waves, and his mind opened to other possibilities.

Now, he wants to open up that understanding of the expansive nature of science for others. “I think outreach helps with the public image of science, and it helps to recruit more scientists,” he says. “It’s also fun because you show science to younger students.”