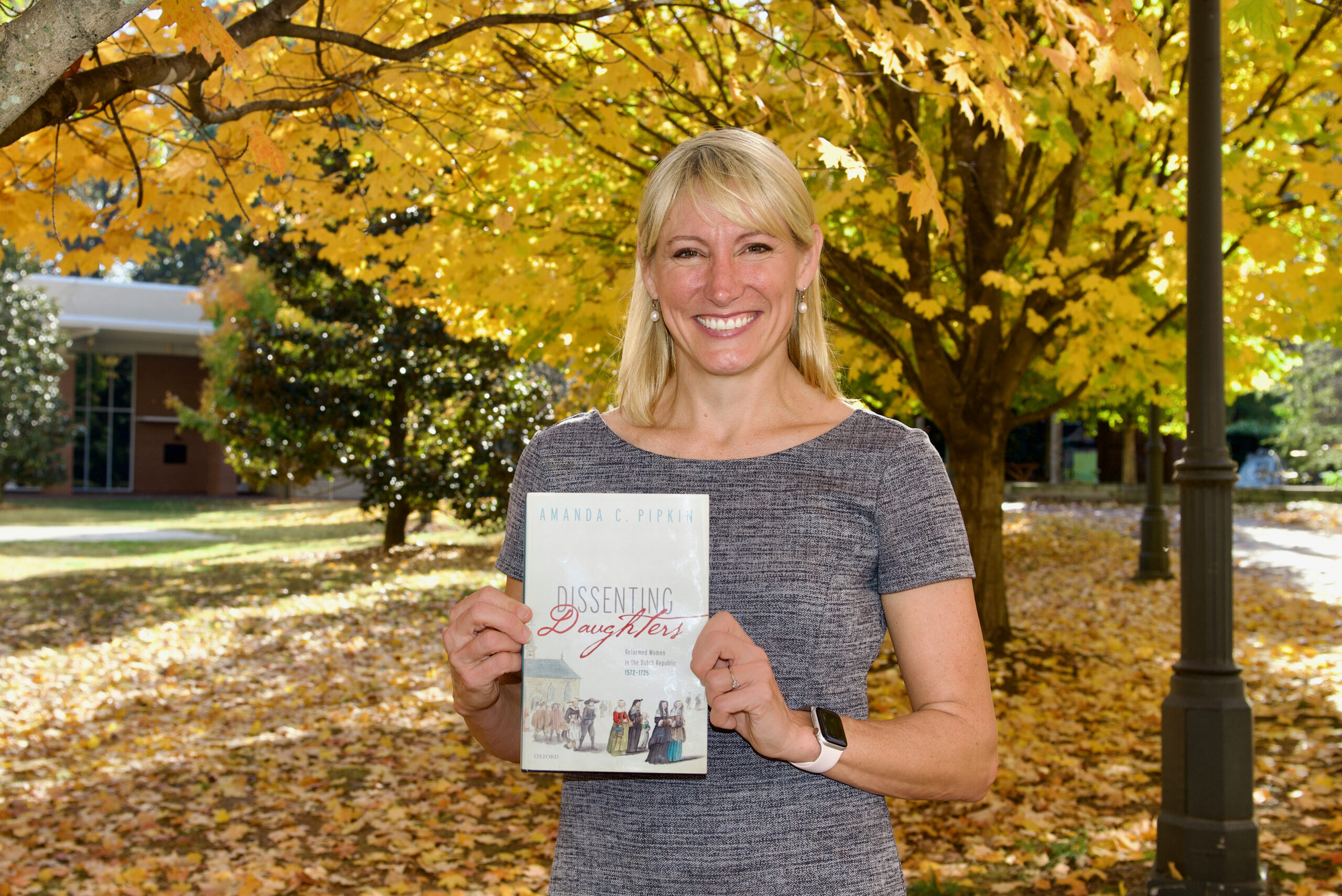 A book by Amanda Pipkin, History Department chair and professor, has received the Society for the Study of Early Modern Women and Gender’s national 2022 Best Book Award.

Pipkin’s book, “Dissenting Daughters: Reformed Women in the Dutch Republic, 1572-1725,” published by Oxford University Press, is the first book-length study of women within the Dutch Reformed Church. Through compelling, detailed case studies of women, the researcher reveals the vital contributions women made to the spread and practice of the Reformed faith.

“This exceptionally well-researched and carefully written book,” the awards committee wrote, “demonstrates how some early modern women creatively drew upon the power and authority accorded to them as wives, mothers, and sisters to advance their own beliefs.” The book provides new information about how religion and religious activity intersected with women’s roles during that time period.

One takeaway from the book, Pipkin said, is that many people — then and now — cope with loss and insecurity by turning to religious devotion and creating tight-knit religious communities.

“I wrote much of this book during the COVID-19 pandemic, when we faced uncertainty, economic upheaval, and increased mortality rates,” she said. “This experience helped me better understand the appeal sixteenth- and seventeenth-century Dutch people found in joining devout Christian communities as they faced unpredictable economic busts and booms and frequent loss of loved ones to illness and accident.”

As these women dedicated themselves to a life of intense devotion and patriarchal subordination in Reformed Christian communities, they found opportunities, even within the socially restrictive circles in which they lived and worshipped.

“They were able,” Pipkin said, “to attain the education, training, economic, and social status that allowed them to thrive as devout authors, song-writers, printers, and organizers of informal religious gatherings.”

The book offers insights for scholars, avid readers of biographies, religious descendants of these early Protestants, and others.

“ ‘Dissenting Daughters,’ ” the awards committee wrote, “offers a detailed, precise account of both these women’s religious writings and their family networks to argue that it was through domestic worship and writing that these women gained the authority to minister to family, friends, and a broader audience both in the Dutch Republic and abroad.”

Earning the prize is an overwhelming honor, Pipkin said. “Among the members of this society are the most impressive and well-known scholars who study women and gender from different disciplinary perspectives,” she said. “These impactful scholars are historians, literary scholars, art historians, linguists, museum studies experts, and others. The society’s leaders cultivate a culture of inclusion, interdisciplinarity, diversity, and toleration that allowed me to find a professional home.”

The Society for the Study of Early Modern Women and Gender is committed to interdisciplinary, intersectional approaches that are historically sensitive and theoretically exploratory, and to teaching that reflects this scholarship. Members include university faculty, students, and independent scholars.